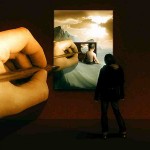 6) SPELL AND PROPHET
8 – The wicked say. “You follow none other than a man bewitched.”
25 The Distinguisher, 8

Hadith: ”A spell was cast on the Prophet in Medina. He went around dazed.”
Bukhari, Hanbal

To the objection raised by Muhammad Abduh and Mu’tezila to this hadith, Muhammad Abu Shhebe provided the following argument: “If Abduh denied the hadith related to the spell cast over Muhammad, many scholars like Al Mazrii, al Hattabi, Cadi Iyaz, Ibn Taymiyya, Ibn ul Kayyým Ibn Kathir, En Nevevi, Ibn Hajar, al Kurtubi and Alusi, have acknowledged its truth.” Shahbe says Bukhari and Muslim also had acknowledged it, went on to add to it the following account: “A spell was cast upon the Prophet. He was believed to have slept with his wives while in fact he had not. Sufyan declared that he had been under a powerful black magic” (Abu Shabbe, Defense of the Sunna, pp. 152-153.).

According to the Quran, those who said that the prophet was bewitched were wicked people. Yet, most of the reliable hadith scholars had been of a different cast of mind. You may revert to syllogistic reasoning to conclude the identity of the wicked people.