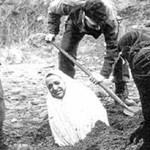 THE GOAT THAT EATS UP THE QURANIC VERSE
The story runs as follows: “The verses of the Quran written on papyri were kept in the house of Aisha, the Prophet’s wife. A hungry goat that had access ate them.” An account of this may be read in the books of Ibn Maja’s Nikah; Hanbal. How can a verse of the Quran that had been completed and learned by heart vanish after the death of the Prophet? According to the traditionalist Islam, Ibn Kutayba uses the following introductory remark before tackling the problem: “The goat is a holy animal.” Then he continues enumerating the merits of this holy goat. “God who annihilated the tribes Ad and Samud might well have a goat to repeal His verse.” Ibn Kutayba, who established an analogy between these atheist tribes destroyed by God and this event, sets a good example for the incongruous approaches of traditionalist, sectarian Islamists.

A hadith falsely ascribed to Caliph Omar states: “People will arise in the future who will deny the existence of rajm. These people will be religious apostates. Had I not feared the people’s allegation that Omar was making additions to the Quran, I would have introduced the rajm verse in the Quran” (Bukhari, Muslim Hudud, Abu Davud).

In our opinion, even this single hadith is enough to argue against the unreliability of the books of Bukhari, Muslim and Abu Davud. According to the mentality of these hadiths, Omar feared public censure more than God.