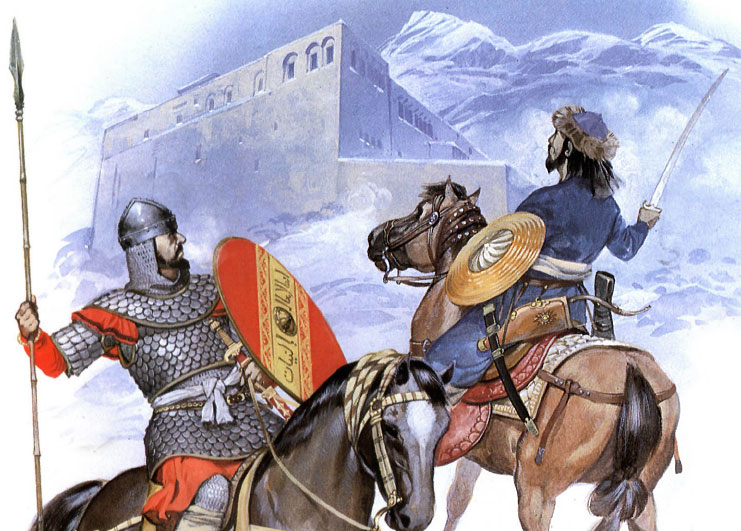 MURDER OF THE PROPHET’S GRANDSONS
It was the Omayyads again who displayed their hostility toward Ali, the Prophet’s son-in-law, and killed Hasan and Hüseyin, grandsons of the Prophet. According to the report of Masudi, it was Muaviye, finding a rival in Hasan, who had him poisoned. Muaviya, who made use of Hasan’s wife, was said to rejoice upon hearing of the death of Hasan who had abandoned the political scene and was living the life of a recluse. Also, Hüseyin, Hasan’s brother, also was killed Karbala by Yazid, Muaviya’s son at. It is reported in historical records that Yazid did not pay any respect to the dead body of Hüseyin and that he had planted the skull of his enemy at the end of a stick and dallied with it. Zaynab, sister of Hasan and Hüseyin, was sent into exile for fear that she might lead an insurrection. The Omayyads, murderers of the Prophet’s grandsons, were brazen enough in claiming that they had done this for the sake of Islam. It is not our intention here to indict the culprits and declare them guilty of evident treacheries. What we are trying to get across is to show how far one can trust these people, the source of iniquities, with regard to their having been the fountainhead of hadiths and sects. The hadith books of today are what have been inherited from them, with additions made during the reign of the Abbasids. These hadiths lay the foundations of Islam that the sects shaped.

They transformed the caliphate into a sovereignty that passed from father to son. There was no end to the books of hadiths and sects that cropped up under the supervision of these caliphs. To what extent can these sects and hadiths, developed by caliphs, the murderers of the Prophet’s grandsons and the governors, be considered dependable? Yet, the majority of Sunni Islamists try to free the Omayyads from blame by pointing to the Sýffý battle as an error of ijtihad (canonical jurisprudence). In this way, they believe they can acquit the founders of their creeds, and, consequently, themselves. One can’t hide the truth, the evil practices of the Omayyads. Up until the reign of the Omayyads, there had been no institution of caliphate that had taken the shape of a sultanate, nor a source other than the Quran. The transformation of the simple lifestyle during the lifetime of the Prophet and the Four Caliphs into a pompous way of living, the conversion of religious leadership into material prosperity and political power and of the caliphate into a dynasty were the origins of the corruption that had begun in this era. There had been caliphs that had become notorious for their orgies and others that had made the pages of the Quran – on which they spotted verses going against their grain – targets for their arrows (see Masudi, Isfahani and Ibnul Athir).

This is the period during which the hadiths appeared in black and white. However, the hadiths, the parables and commentaries were all mixed up. Although we know that the hadiths had begun to be copied under the Omayyads, there is no book of hadiths still existing from that period. The Kutub-i Sitte (the famous books of hadiths) were written afterward, during the rule of the Abbasids. If we consider the Omayyads to have been a bridge, a source for the hadiths (assuming that the fabrications of the Abbasids had never existed), we can readily see the predicament. Ali had made the following remark about the Omayyads: “They also wear the garb of religion, but with one difference; they put it on having turned it inside out.” The system of sects that claimed to be representative of the established religion has deceived the public and imposed itself as the religion. It is to be regretted that what was interpolated and added to Islam at that time is believed to be part of the religion. A lunatic has thrown a stone into a well; forty intelligent and sane persons do their utmost to get it from there, without success. The gist of the matter lies not in Islam as such, but in those that put it on as a garb turned inside out. Even the smartest suit will look awkward on someone if it is worn turned inside out. To tell all the suffering caused by the Omayyads would take volumes, but this is not our intention.